Security solutions often monitor process relationships to detect malicious behaviour. For this blog post we’ll see how Microsoft Defender flags a MS Word document if you attempt to spawn powershell.exe, regardless of what the spawned PowerShell process does. We’ll also explore how we can bypass this detection.

Below we have an innocent looking VBA script that spawns PowerShell.exe via the Shell command and runs ping google.com.

If we go view ‘Protection History’ we can see its being treated as a Trojan. 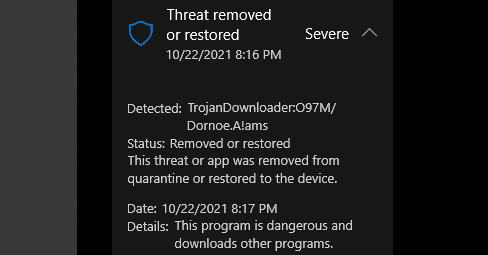 With an additional 10 characters to our command, Microsoft Defender won’t complain anymore. We’re going to modify our Shell command as shown below.

Below we can see how the parent/child relationship was modified.

Although cmd.exe is a better alternative than powershell.exe, it’s still a highly monitored process by defenders. A better way which avoids cmd.exe is shown below.

This way cmd.exe and powershell.exe are avoided as direct child processes.

Why Does This Work?

It seems that Defender blacklists powershell.exe as a direct child process. In pseudocode it’s probably programmed something like this:

if WINWORD.EXE spawns powershell.exe then Trojan

Clearly we don’t fit the above description so we’re good!

In a real engagement you should probably avoid the Shell command altogether, but the point of this post is to demonstrate how small modifications in process relationships can result in a different outcome.