Analyzing Cortex XDR and finding ways to bypass it.

This article was written in July 2021 but publishing was delayed to allow the security team an opportunity to fix the findings.

All the methods require administrator/root privileges unless mentioned otherwise.

To disable the Cortex XDR agent one registry key needs to be modified. This works despite having tamper protection enabled.

The registry key is located at HKLM\SYSTEM\CurrentControlSet\Services\CryptSvc\Parameters\ServiceDll. Modify the DLL to a random value.

After rebooting the machine this should happen: 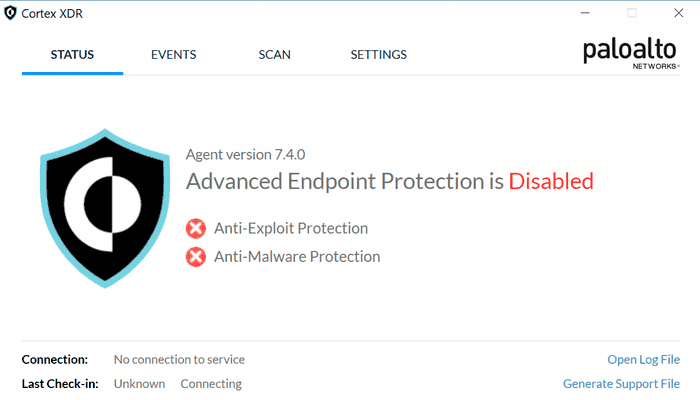 Cortex XDR has various global settings, one of which is the ‘global uninstall password’. By default the password is Password1 and if the administrators did not change it then it’s trivial to disable the XDR agent.

Head to C:\Program Files\Palo Alto Networks\Traps and find cytool.exe. There are various commands you can run if the default password was not changed, some of which are listed below:

On Mac you would go to this path instead /Library/Application Support/PaloAltoNetworks/Traps/bin and use cytool. You can use the same commands as mentioned above.

Interestingly, inside the /bin folder there’s another executable with the name traps_uninstaller_tool which allows you to uninstall the agent if you have the uninstall password.

Cortex XDR agents on Linux have no uninstall password. If you’re root then go to /opt/traps/bin and use cytool to uninstall Cortex.

In case the default password was changed, we can grab the hash and try to crack it.

Head to C:\ProgramData\Cyvera\LocalSystem\Persistence\agent_settings.db and in there you’ll find a few ldb files. You only need to focus on the largest ldb file.

Now for this to work you’ll need Sysinternals Strings64.exe. A better way would be to copy the ldb file to an offline machine and use strings there.

The output file will have the password in the same algorithm but encoded differently. PasswordHash is base64 encoded whereas password is hex encoded. Feel free to use whichever one along with it’s salt value. Example values are below (The password is Password1):

I created a simple Python script with the following parameters that successfully cracked the hash.

Head to /Library/Application Support/PaloAltoNetworks/Traps/persist/agent_settings.db and use the strings command as shown above. The rest is exactly the same.

It’s important for security solutions to implement adequate tamper protection to avoid being targeted by attackers. Furthermore, it shouldn’t be trivial to obtain credentials or privileges that can disable the security solution.

← Tampering With ForcePoint One DLP EndPointAttacking With WebView2 Applications →